Speech by V.I. Bulavin at the conference “Customs Legislation 2018” 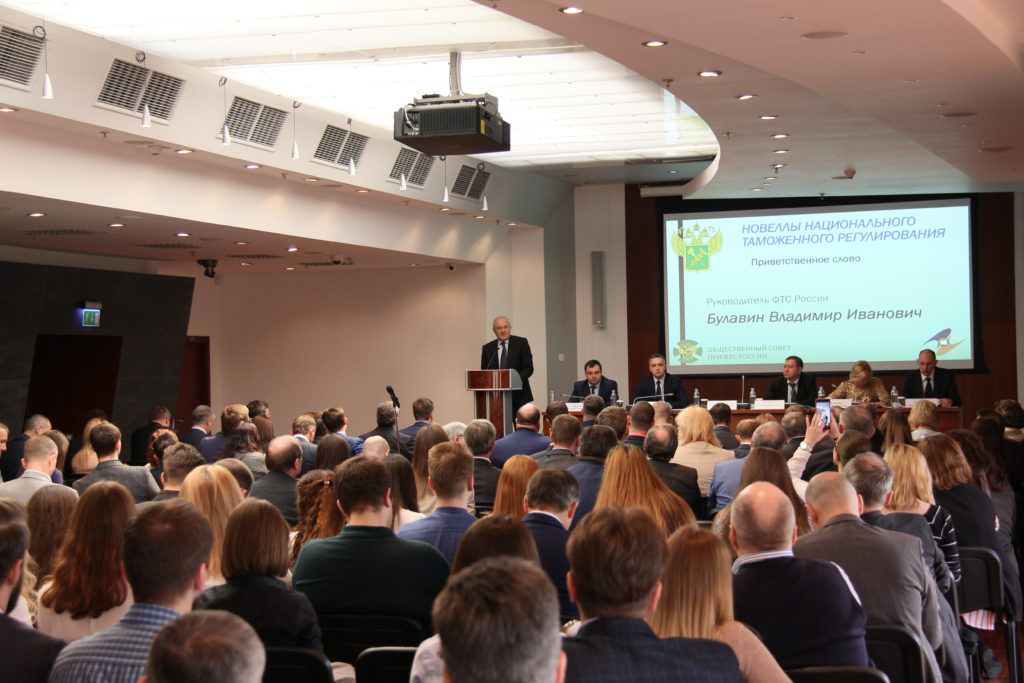 Transcript of Vladimir Bulavin’s speech at the conference “Customs Legislation 2018: First Results of Practical Application“, organized by the Public Council under the FCS of Russia.

Since January 1, 2018, a new Customs Code has been in force throughout the whole territory of the EEC, and the operational headquarters set up by the FCS of Russia is operating just the same, given that, unfortunately, the law on customs regulation has not yet been adopted. It should be noted that there are not many jobs at this headquarters, since all the main novels of the new Customs Code were reflected in the Comprehensive Program for the Development of the FCS of Russia until 2020, which we developed jointly with the business, with the participation of the Public Council and the Expert Advisory Council and adopted in 2017.

The complex program is implemented by us on the principle of “simplicity and convenience for business, efficiency and security for the state”. In my opinion, the customs sphere should be (and it will) be simple and convenient for business, effective and safe for the state. The essence of the significant transformations that we carry out are cardinal changes in the perception of customs both inside and out. Customs should not only ensure compliance with customs legislation and implementation of foreign trade activities, but also make customs administration comfortable and convenient. The integrated program provides for significant reform of the system of customs authorities, which were supported by the President of the Russian Federation and the head of the Government of the Russian Federation. The result of fulfilling the instructions of the country’s leadership will be the concentration by 2021 of the entire declarative array in 16 electronic declaration centers located exclusively in public areas. Now we have 672 places where it is possible to issue customs declarations. They are mostly located in private areas. This will significantly reduce corruption risks, reduce conflict potential due to equidistance of the places of customs declaration and equal accessibility of customs operations and customs procedures for all participants in foreign trade activities. This trend has recently been well seen in the daily activities of customs authorities.

Systematically and systematically, we increase information resources and automate customs procedures. We managed to significantly reduce the administrative burden on business. According to the results of 2017, the average clearance time for non-risk goods is 1 hour 31 minutes for imports, 46 minutes for exports. The share of automatically registered declarations from the total volume of declarations in 2017 was 22%. The share of automatically issued declarations filed by participants in low-risk foreign economic activity was 20%. The average time of automatic registration does not exceed 3 minutes. The automatic release time does not exceed 5 minutes. The share of electronic transit declarations was over 60%. The number of persons engaged in foreign economic activity has significantly increased. Currently, this is about 85 thousand traders.

One of the activities of the FCS of Russia is to support domestic exports. In 2017 automation and categorization was extended to exporters of goods. It should be noted that already today among participants in foreign economic activity of a low risk level, more than 40% are representatives of small and medium-sized businesses.

The new Customs Code prescribes the Union’s customs services to make maximum use of the possibility of interagency electronic interaction. The FCS of Russia carries out an electronic exchange of information with 32 agencies. In 2017, the customs authorities of the country formed about 17.5 million requests to the information resources of other federal executive bodies. We received 3.5 million requests to our information systems. In 2018, the technical implementation of 25 new areas of interagency cooperation with the use of the SMEW infrastructure is planned.

A set of measures is being taken to create a single mechanism for customs and tax administration. The result of this work should be the integration of information systems of customs and tax authorities, which will ensure the exchange of information between the FCS of Russia and the Federal Tax Service of Russia, and will create a national system for traceability of goods and control over their turnover, containing information on declaring, issuing and what time the goods are in circulation. That is, starting with the release of goods by customs authorities and ending with the receipt of information from the cash register of the trading organization. The interaction of customs and tax services within the system of traceability will discipline the participants in foreign trade activities, creating conditions in which deviation from payment of customs and tax payments will be extremely difficult. Developing our information resources and telecommunication systems, we will create a rich digital environment where every violation in the customs business, both from the participants in the foreign trade activities, and from the officials at the customs, will leave an electronic trace, which must be identified in a timely manner and according to which Appropriate decisions were made.

The key issues in the activities of customs authorities and in the relationship of customs authorities with business are the issues of improving the quality of customs value control. At present, systems have been created that allow setting in automatic mode cost indicators of risk without the participation of an official in real time, using information from the database of customs authorities. Taking into account the need to create a transparent and objective automated system for managing value risks, it is extremely important to obtain reliable and independent information about the price of the goods from all available information systems, including using the force of the means of customs offices. Probably, this is the most difficult question. That is why, together with the Public Council, the Expert Advisory Council, it was decided to create a special commission under the Expert Advisory Council with the active participation of business representatives in order to deal with the issues of customs value formation in a subject-oriented manner, systematically and smoothly.

It should be noted the significant changes in the content and tone of our dialogue with the business, aimed at maintaining an atmosphere of trust and creating a conflict-free environment. A constructive dialogue with the business community allows us to find the optimal solution that meets both the interests of the state and the interests of the participants in foreign economic activity. The comprehensive development program of the FCS of Russia is a clear example of our constructive interaction with the business community. It is no accident that a separate section sets out indicators that we called “10 Steps Towards a Business”. We have rather ambitious goals. By 2021, the percentage of automatically registered declarations should be 99%, and the percentage of automatically issued declarations submitted by low-risk traders should be 80%. If 80% of declarations are to be submitted by low-risk traders, then by 2021, 64% of the declarations, with our active aspiration towards each other, will be issued before the actual decision.

As a response gesture the business community has developed and actively promotes the Charter of Conscientious Participants in Foreign Economic Activity, which creates incentives for voluntary compliance with rules and regulations on the part of business. On April 13, 2018, the Charter was signed by 214 participants of foreign trade activities, supported the Declaration on the approval and support of the Charter of 55 public organizations and representatives of the customs industry. We welcome this. For us, partnership with a bona fide business is strategic. At the same time, our invariable approach is equidistance and fairness for all participants of foreign trade activities. Nobody has done preferences and we will not do it.

To build meaningful dialogue, we change the format of the Expert Advisory Council. The new order is aimed at creating an effective mechanism of interaction with bona fide participants of foreign trade activities, which will allow to react promptly to problems arising in relations between customs authorities and business circles, and to promote uniform enforcement in the customs legislation. Understanding of society and law-abiding business, support in the course on automation and informatization of our processes are necessary for the successful implementation of all our rights with you.