The new Customs Code of the Eurasian Economic Union will come into force on January 1, 2018 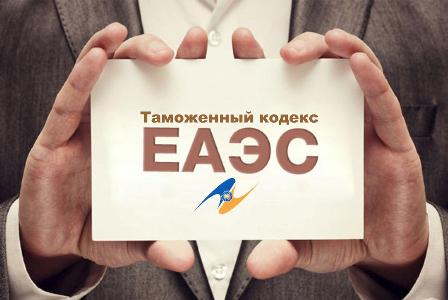 Ratification of the Agreement on the Customs Code of the Eurasian Economic Union (EEU) will be completed before the end of this year. Presidents of the countries of the Union once again confirmed their readiness to facilitate the signing of the document by signing the joint statement prepared following the results of the Supreme Eurasian Economic Council on October 11, 2017.

The new customs legislation of the Union has been developed taking into account the current level of development of electronic technologies, contains many novels that are useful for entrepreneurs. Owing to this fundamental document, customs technologies will be digitized. The CC of the EEU eliminates many of the problems that have accumulated in law enforcement practice. The new code legally secures the opportunity for a foreign trade participant in the presence of an electronic digital signature to make the majority of transactions from his computer through the Internet, interacting with the information system of the customs authority.

At the same time, the new customs legislation will save traders from the need to submit documents to the customs authority on the basis of which an electronic declaration was filled. Documents will be required only in those cases when risk profiles will work and it will be only those documents that the information system will determine, and not the customs officer.

In a number of cases, decisions to register a declaration for goods, registration itself, as well as a decision to release goods, can be taken automatically by the information systems, without the participation of the inspector.

According to the new code, the time of release of goods will be reduced to four hours, while the standard release time fixed in the Customs Code of the Customs Union is more than 24 hours.

The new code maximally transfers customs control to the stage after the release of goods, and also provides an opportunity to take advantage of a number of delays in payment of customs payments. After the entry into force of the Customs Code of the EEU, the position of market participants working in the status of authorized economic operators will be seriously improved, and new special simplifications will make this status even more attractive.

The new code provides legislative opportunities for the full implementation of the “single window” mechanism in the system of regulation of foreign economic activity, work on which is also currently being conducted at the EEU.

The joint statement notes that the date of entry into force of the document – January 1, 2018 – will not be postponed, and citizens, economic entities and state bodies of the countries of the Union should prepare for work in new conditions, in advance of the new Customs Code of the EEU.